Colorado continues to shift blue: The 2020 election, explained in graphics 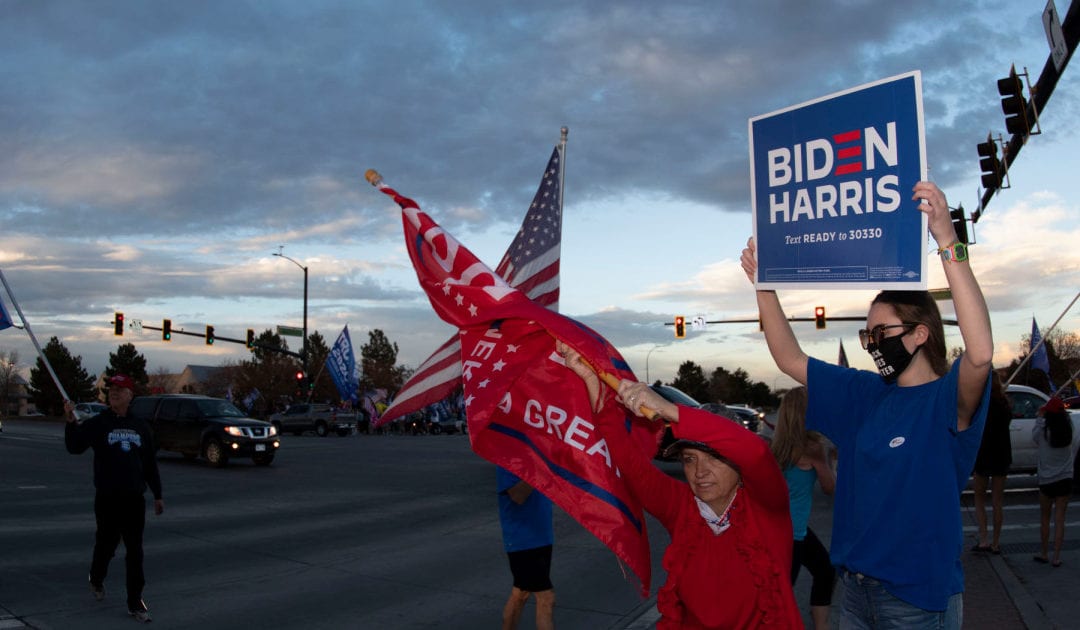 The 2020 election continued the decades-long shift toward Democrats in Colorado, led by voters in suburban counties and punctuated by huge turnout in the party’s strongholds of Denver and Boulder.

“Colorado is officially blue. Not purple, not periwinkle, not powder blue,” says Steve Welchert, a veteran Democratic strategist. “Will the GOP claw back seats and races from time to time? Sure. But this is not a temporary shift.”

The landscape gave Joe Biden the largest presidential victory for any candidate since 1984 and carried John Hickenlooper into the U.S. Senate by the biggest margin in more than a decade.

A deep-dive into the numbers shows that one-time swing counties in the Denver metro area are now solidly Democratic and big Republican counties are no longer bright red beacons as voters moved away from President Donald Trump and U.S. Sen. Cory Gardner.

Here are six graphics that help explain what happened in the 2020 election in Colorado.

The scale of the shift toward the Democratic Party is most evident when the 2020 presidential election is compared to the 2016 contest.

The Democratic vote increased in 40 of the state’s 64 counties in 2020, a Colorado Sun analysis shows. The largest shifts came in the Denver suburbs of Jefferson and Broomfield counties, as well as a couple of smaller mountain communities.

In these areas, and elsewhere, an influx of new residents, changing voter demographics that don’t favor Republicans and a dislike of Trump helped push the Democratic vote totals higher.

The most noticeable difference is how Trump’s vote totals shrank in Republican-heavy counties. In El Paso — home to conservative hub Colorado Springs — Trump’s margin of victory this year sat near 11 percentage points compared to 22 percentage points four years ago. In Douglas County to the south of Denver, it went from an 18-point win to a 7-point margin.

The 2020 vote suggests the days are gone when big Republican vote totals in El Paso and Douglas counties neutralized the big Democratic numbers in Denver and Boulder.

“Historically Denver and El Paso canceled each other out, as did Douglas and Boulder — then we’d battle over the (suburbs) and Larimer. This is a tectonic shift,” Welchert, the Democratic consultant, said..

Not too long ago, the conventional wisdom in Colorado politics went like this: “As goes JeffCo, goes the state.”

No more. Jefferson County, located on the western side of Denver, is no longer a bellwether. In fact, Democrats more than doubled their margin of victory in the county in the 2020 presidential race, compared to four years ago.

Likewise, other Denver metro counties — Arapahoe, Adams and Broomfield — are solidly Democratic by double-digit margins, the presidential vote shows. Larimer County, where Fort Collins is located, similarly shifted from a roughly 6 percentage points Democratic advantage in 2012 to a 16-point mainstay in the blue column. A strong turnout from women and unaffiliated voters helped lead the push.

“I think it is just generally indicative of the shift across the state,” said Andrew Struttmann, a Republican strategist.

The remaining swing counties — those that shifted between Democrats and Republicans in races at the top of the ballot — all offer much smaller troves of votes. Pueblo County, the largest at 119,000 registered voters, picked Trump in 2016 and then Biden this year, both by small margins.

The remaining seven counties that flipped back and forth total about 100,000 registered voters, the largest being Garfield, Chaffee and Grand counties.

Six years ago, the Republican upset Democratic incumbent Mark Udall by 2 percentage points, 48% to 46%. In 2020, Gardner lost to Hickenlooper, the former Democratic governor, by 9 points, 53% to 44%.

The differences between the two battles are substantial. Gardner won in a midterm election that leaned toward Republicans — the party out-of-power in the White House — but he ran for reelection in a year where Democrats were favored. Moreover, the state’s new voters aligned with Democrats and skewed younger.

The turnabout is most apparent in the Denver suburbs. In 2014, the counties that ring the capital city all favored Udall, but Gardner kept margins close, no larger than a 3 percentage point Democratic advantage. Jefferson County was practically tied.

In 2020, Hickenlooper won all the same counties by 13 points or more. He even shrank Gardner’s advantages in Republican counties such as El Paso, Douglas and Mesa by double digits — shifts of 14, 16 and 11 points, respectively.

The Hickenlooper campaign’s pollster, Anna Greenberg of GQR, said the attacks leveled against the candidate just didn’t stick because his two terms as governor solidified his image in Colorado. “He was not just well known and well liked, he’s the kind of person that people thought they could hang out with,” she said.

The Democratic vote increased in three seats, giving the party larger margins of victory in the 1st and 6th districts and closing the GOP edge in the 3rd District. Republican Lauren Boebert’s vote total over Democratic challenger Diane Mitsch Bush in the vast Western Slope district is the smallest in four election cycles.

Elsewhere, Democrats appeared to hit a wall after the huge 2018 blue wave. The party’s victories were smaller than two years ago in the 2nd and 7th districts. And in the 4th and 5th districts, Republicans increased their margins compared to 2018.

The congressional numbers will serve as the benchmark for the 2022 election, when Colorado is expected to debut a new district and shuffle the boundaries for the existing ones. The state plans to begin drawing new district maps in 2021 as part of the decennial reapportionment.

Struttman, the GOP strategist, said the redistricting process gives his party hope. “We have nowhere to go but up because there aren’t that many places left to lose,” he said. “While that sounds extremely pessimistic, that is a place to rebuild.”

One of the fascinating dynamics of the 2016 election was a focus on third party candidates as an alternative to Trump and Clinton. This is particularly true in Colorado, which led the “Never Trump” movement at the Republican National Convention.

In the November election, 8.6% of voters cast a ballot for a third party candidate in Colorado — nearly twice Clinton’s margin of victory.

But come 2020, that dynamic shifted back to normal. Only 2.6% of voters picked a third party candidate. And this came despite rapper Kanye West’s candidacy, which was seen as an attempt to pull votes from Biden.

“Without a doubt Tuesday night’s results were a thumping shellacking for America’s third parties,” said Bill Hammons, a Colorado resident and the Unity Party’s presidential candidate.

The largest group of voters were between ages 25 and 34, according to returned ballot data from the Secretary of State’s Office, with nearly 580,000 ballots. The second highest ballot count came from the 55 to 64 age bracket.

The protests about racial justice helped drive the interest, she added. And the higher numbers came after election officials added more ballot drop-off boxes, including on college campuses.

When it comes to a proportion of the population, demographic numbers still give older voters the edge. Nearly 9 in 10 voters ages 65 to 74 cast ballots, the highest turnout percentage by age group in the 2020 election.