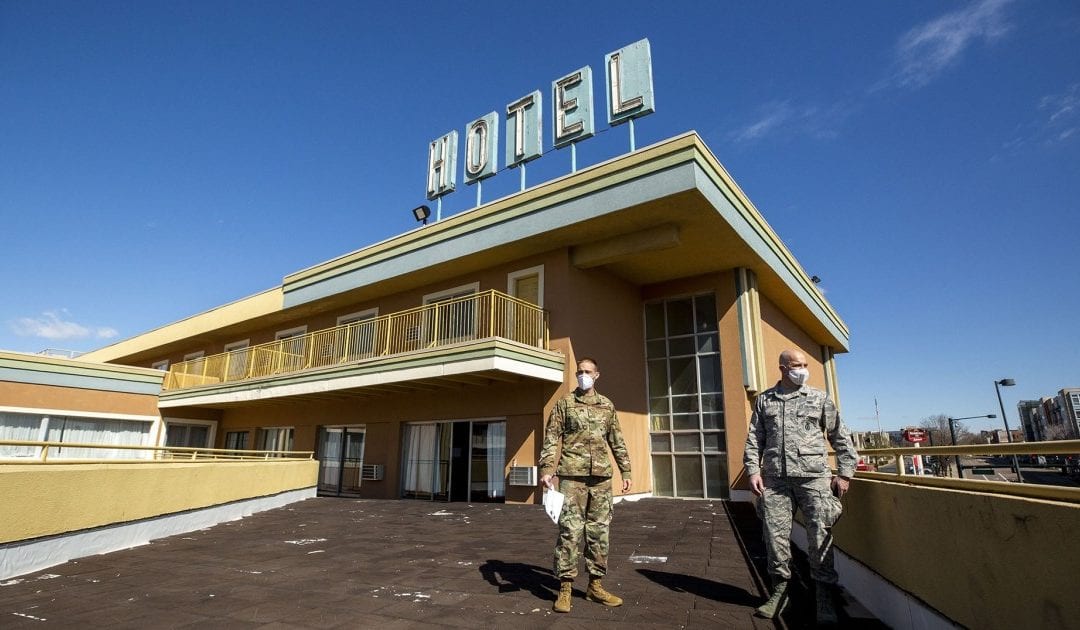 Some 5 percent of people experiencing homelessness on any given night in Denver are older than 65, putting them in the age group at high risk of falling seriously ill if they are sickened by the novel coronavirus.

On Wednesday, the Colorado Coalition for the Homeless began moving people aged 65 and older into a motel at 2600 Zuni Street to try to keep them safe from COVID-19. The coalition said it has room for a total of 174 people at two motels it has leased at that address and was working with the National Guard and Denver Human Service workers to move people in.

“These new rooms are targeted to those experiencing homelessness who are at greatest risk of death from the virus — those over 65 and those with underlying health conditions,” John Parvensky, who is president and CEO of the Colorado Coalition for the Homeless, said in a statement. “Those who have tested positive for COVID or who have symptoms consistent with COVID and are awaiting testing results will be directed to the other ‘respite’ motels for isolation and medical monitoring.”

His nonprofit had previously responded to the pandemic by leasing 207 motel rooms for people experiencing homelessness and is looking for more.

In addition, the city has secured 227 respite rooms in hotels and motels, city spokeswoman Heather Burke said in an email Wednesday.

On Monday, Denver City Council approved a contract that, beginning Thursday, will secure 151 rooms at the Hampton Inn & Suites Denver-Downtown at 1845 Sherman Street. The rooms are for “high-risk” people experiencing homelessness who have not yet been exposed to or diagnosed with COVID-19. The city, which also is looking for more rooms, says it will be focusing on older people for those at the Hampton Inn. The Colorado Coalition for the Homeless will support the city at Hampton Inn.

The Hampton Inn contract brings the total rooms secured between the city and the Colorado Coalition for the Homeless to 759. In addition, the coalition said it was working on a lease Wednesday with a motel operator to add 138 more rooms in northeast Denver beginning next week.

The coronavirus outbreak also has led to the opening of new, 24-hour, seven-day-a-week emergency shelters in the city. The Denver Rescue Mission is running one for men at the National Western Complex and the Salvation Army is in charge of another for men in a facility near 48th Street and Colorado Boulevard. In addition, the Salvation Army’s Crossroads shelter for men, which like many existing shelters had been open only overnight, switched over the weekend to 24 hours, seven days a week.

As snow fell Wednesday night, 648 stayed at the National Western Complex, Denver Rescue Mission spokeswoman Nicole Tschetter said in an email Thursday. She said her nonprofit sent another 51 people who were at least 65 years old or for other reasons seen as medically vulnerable to respite rooms secured by the city of the Colorado Coalition for the Homeless on Wednesday.

“We continue to coordinate with the city to make sure everyone is sheltered,” Tschetter said.

A 24-hour, seven-day-a-week shelter for women will open early next week at the Coliseum.

The new shelters have more space for each guest and have allowed older shelters to provide more space as well at a time when people are being advised to keep six feet from one another in public places to try to cut down on the spread of the coronavirus. The Centers for Disease Control and Prevention has issued COVID-19 guidance for homelessness services providers that recommends providing a minimum of six feet between the heads of people on mats or cots in general sleeping areas for those who are not experiencing symptoms of a respiratory illness.

“There must be at least six-feet between their heads,” city spokeswoman Burke said. “This is generally accommodated by having residents sleep head to toe” at the larger shelters.

“If a shelter is not meeting this standard, then Denver could require it,” Burke added in an email.

The CDC recommends that people experiencing homelessness who have mild respiratory symptoms consistent with COVID-19 be confined, if possible, to individual rooms in shelters.

According to the latest Point in Time report on homelessness, nearly 4,000 people are experiencing homelessness in Denver on any given night. Of those, about 200 are at least 65 years old.

Mayor Michael Hancock has said the city needs some 3,300 hotel and motel rooms “to meet the anticipated need among people experiencing homelessness and the needs of our local hospitals in the weeks ahead.”