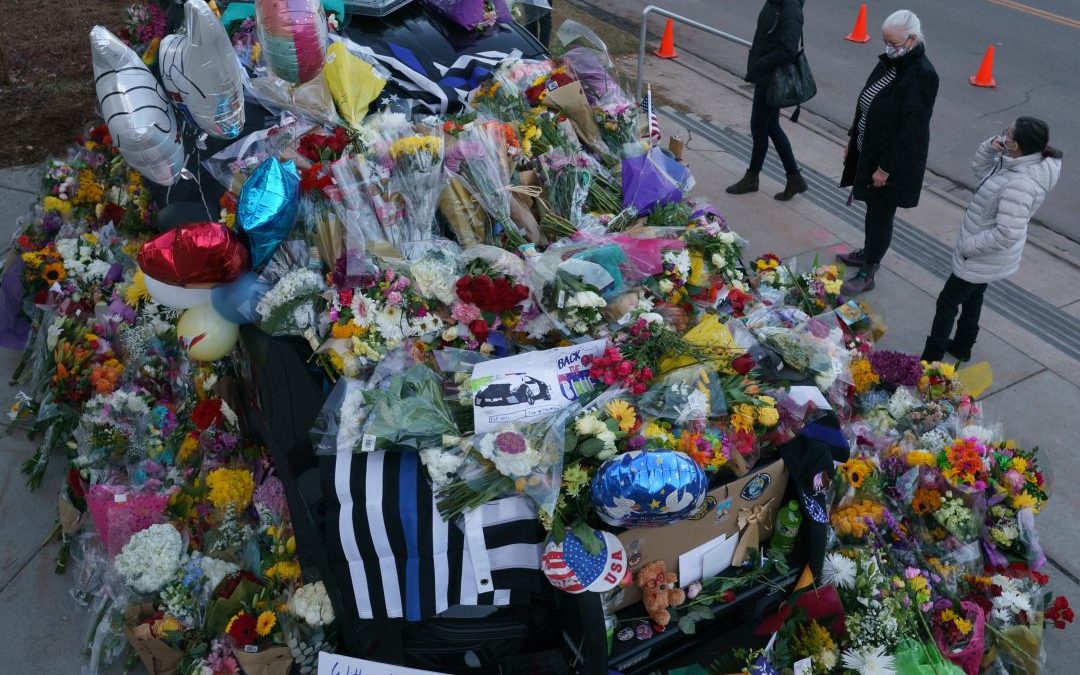 By Colleen Slevin, The Associated Press

A Colorado police officer shot and killed after rushing into a Boulder supermarket where a gunman opened fire sacrificed his life and showed what is best about police, Denver’s archbishop said Monday during a funeral Mass for Officer Eric Talley.

“Jesus has told us, greater love than this no man has than to lay down his life and Eric lived that,” Archbishop Samuel Aquila said during the traditional Latin Mass, the style beloved by Talley, at the Cathedral Basilica of the Immaculate Conception in Denver.

Aquila offered his prayers and condolences for Talley’s family, which include his wife and seven children. He also said he would pray for the protection of police, who are too often “taken for granted.”

“For too often, you are are taken for granted and yet in situations like this, you are the ones who protect human life,” Aquila said.

Talley’s casket, draped in black and flanked by six unbleached beeswax candles to signify that he has gone to God in his natural state, stood near the altar as the Rev. Dan Nolan led celebration of the Mass in Latin, which included interludes of ethereal singing by a choir as well as chanting. Talley’s family, at their request, was not shown on a livestream of the service and no family or friends spoke during the service that followed the style that pre-dated reforms made by the Second Vatican Council in the 1960s.

According to police, officers arrived at the store one minute and 40 seconds after being alerted to the shooting on March 22. They said Talley led an initial team of officers inside within 30 seconds of arriving and the suspect, later identified as Ahmad Al Aliwi Alissa, 21, shot at the officers, killing Talley. Nine other people, including customers and workers, were also killed.

“No other individuals were shot or killed after these brave officers engaged the suspect,” police said in a tweet last week.

Alissa, who was wounded in the leg during an exchange of shots with police, has been charged with 10 counts of first-degree murder and one count of attempted first-degree murder for firing at another officer. Prosecutors expect to file more charges as the investigation continues.

One of Alissa’s public defenders, Kathryn Herold, told a judge during his first court appearance that they needed to assess Alissa’s mental illness but did not provide details about his condition.

A law enforcement official briefed last week on the shooting said Alissa’s family told investigators they believed Alissa was suffering some type of mental illness, including delusions. The official was not authorized to speak publicly and spoke to the The Associated Press on condition of anonymity.

The funeral’s sermon by the Rev. James Jackson focused on how Jesus, whose suffering and death is marked by Christians during Holy Week this week, was watching during the suffering and death seen in Boulder a week ago, a tragedy that Christians believe is part of the world’s sin that he atoned for. He also called for action from public officials.

“And who knows but that some politicians will show some common sense and move to increase funding for the police. Perhaps even more sense will be shown by efforts to restore Christian culture to our country. Writing more and more laws will not be sufficient,” he said.

Talley, who grew up in Albuquerque, New Mexico, took an untraditional route to becoming a police officer. He held a master’s degree in computer communications but left his office job to join the department in 2010 at the age of 40 because he wanted to serve his community, his father Homer “Shay” Talley, 74, told AP last week.

A memorial service was also planned for Talley on Tuesday at a large non-denominational church, Flatirons Community Church, in Lafayette. The service is open to the general public but attendance is also restricted because of the pandemic. Organizers are encouraging people to watch a livestream of the service on television news stations.