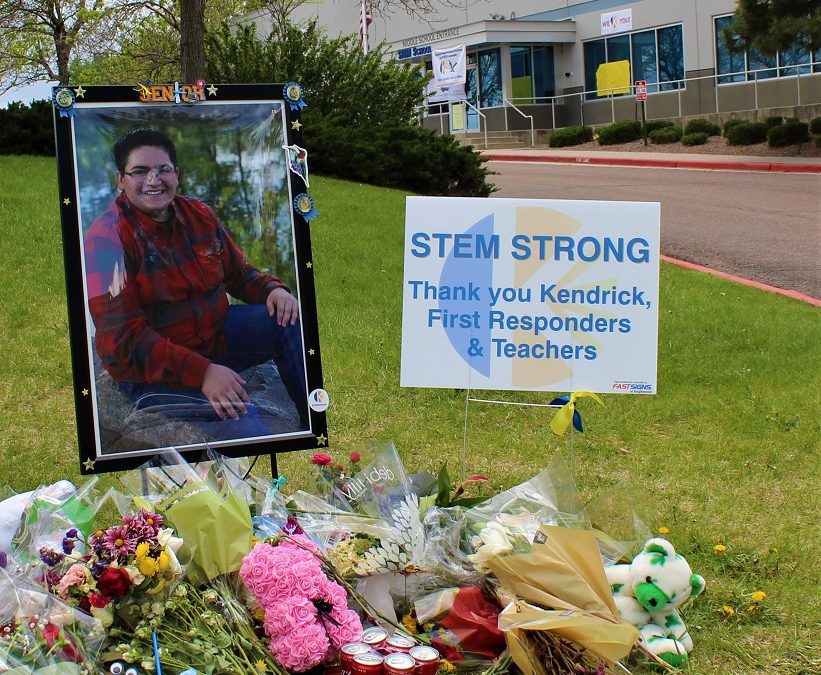 (CN) — One of three students who tackled a gunman at STEM School Highlands Ranch in Colorado — disrupting a mass shooting plot — testified during the suspect’s trial Friday.

Brendan Bialy recalled watching the “Princess Bride” in school on May 7, 2019, when suspect Devon Erickson pointed a Glock at the British Literature class and said, “Nobody fucking move.”

“As we were watching the movie the room would be dark except for the screen, which would be illuminated on occasion,” Bialy told the court, wearing a blue button up shirt and a black cloth mask. The trial is being held in a socially distanced courtroom at the Douglas County Courthouse in Castle Rock, 30 miles south of Denver.

There is no video footage from the attack on classroom 107, but several witnesses in addition to Bialy have painted a picture of the events that unfolded.

“There was very much a shock,” Bialy said when saw Erickson pull out the handgun. Bialy said he started hitting Erickson because “it was just instinct.”

“I punched him in the arm a couple of times, and then I peeled his fingers off the gun. I had to fight for the handgun,” Bialy said, demonstrating the act for the jury. Once disarmed, Bialy recalled Erickson saying, “I’m sorry, I’m sorry, Alec made me do it.”

Alec McKinney pleaded guilty to first-degree murder and attempted murder among other charges and was sentenced in July 2020 to life in prison plus 38 years. Because he was 16 at the time, McKinney may be eligible for parole after 40 years.

“Tell the jury what is the very first moment in your contact with the defendant that he stops resisting,” Brauchler said building up to a crescendo.

“While Josh is on stop of him and I have gained possession of the gun,” Bialy responded emphatically.

After Bialy pulled the gun from Erickson, he noticed Castillo had been badly wounded and attempted to apply pressure to the wound.

Erickson’s defense attorney, Dan Kaplan, asked Bialy to confirm that Erickson directed Bialy to a sweatshirt he could use to put pressure on Castillo’s wound.

Despite Bialy’s efforts, Castillo did not survive. In addition to killing Castillo, eight students suffered gunshot wounds in the attack.

During opening arguments Thursday, Erickson’s defense claimed their client had no intention of harming his classmates but had been forced into the plot by McKinney. The prosecution counters that Erickson had hoped to get away with the attack, while McKinney planned to die by suicide.

Erickson faces more than 40 felony charges including first degree murder. If convicted, he faces a maximum sentence of life in prison without parole. Colorado repealed the death penalty in 2020.

The trial is scheduled to continue through the last week of June.