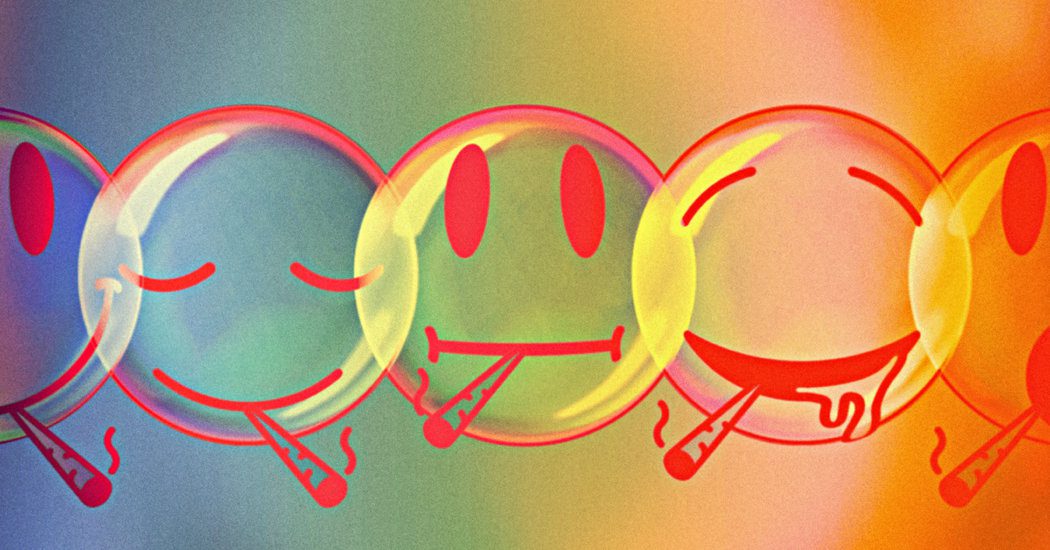 Russo’s research was not without its problems. Scents could not be totally eliminated, the effects of THC couldn’t be successfully blinded and the prodigious daily cannabis intake of at least one participant made him a poor judge of the effects of individual THC/terpene combinations. Still, Russo found consistent correlations. THC alone, he found, lowered mood and distorted perception, and proved over all to be “really hard to function on.” He recalled one session in which, as it turned out, he had inhaled pure THC. “It was my turn to make dinner that night, and it was like: ‘Oh, God, I’m not sure I can do this. Where’s the knife? What do I need to do next?’ Everything was so hard.” But throw in pinene, the terpene that gives a pine woods its scent, and “all of a sudden that’s gone. You’re clear. You have no problem remembering anything.” Limonene, one source of citrus’s distinctive odor, also cured the THC blues, “making this unpleasant thing vibrant and alive and electric.” On the other hand, some terpenes just made things worse — like myrcene, an oil that smells a little like cloves and is present in high concentrations in hops, on which, Russo recalled, “I can’t function, I can’t think, I can’t move.”

In 2010, at a conference honoring Mechoulam, Russo presented a paper called “Taming THC,” which compiled more than 400 studies that strengthened the case for the role terpenes played in the variable effects of pot. It did not directly mention Russo’s D.I.Y. research, but a careful reader could find observations about the effects of specific combinations on memory, cognition and mood — that myrcene-heavy strains may produce “couchlock,” that pinene might be an “antidote” to the negative effects of THC — that were at least as indebted to Russo’s experiments in Amsterdam as to anything in the scientific literature. The paper was published the following year in the prestigious, widely read British Journal of Pharmacology.

Russo was not the only cannabis researcher studying terpenes, and “Taming THC” was not the first scientific article to speculate about their role in cannabis intoxication. It was also meant to be the starting point for more rigorous research into terpenes, not the final word on their effects. But the article, with its concise charts of correlations between terpenes and drug effects, came along at a crucial moment in the history of pot: By 2011, 15 states had approved medical marijuana, and Colorado and Washington were on the verge of making the drug legal for recreational use.

A new industry was ready to burst into being, and here, in the legitimate academic press, was a paper providing a map to what Russo called a “pharmacological treasure trove.” If the paper’s promises held up, a company could even take aim at the most tempting prize of all: the vast number of Americans who had never tried weed before, and others who had aged out of it but might be brought back on board. For that market, it wasn’t enough for cannabis to be legal; the drug had to be as predictable as a pre-dinner martini.

Recently, however, a few companies in the United States and Canada have begun an aggressive investigation into the entourage effect, though they are forgoing many protocols of the pharmaceutical industry. Last year, I met Jon Cooper, the founder of a company called Ebbu, at a co-working space in Denver. Cooper had been toying with the idea of a cannabis start-up ever since Colorado legalized the drug, but he was deterred by his own history with pot. “I’d had some awesome experiences that I wished I could have all the time,” he told me. But he’d also had “some completely horrific experiences that I never ever wanted again.” Cooper says he couldn’t sell something he didn’t believe in; but what if he could figure out how to “capture in a bottle the awesome experience, so every store I walk into, I could get that same experience. Wouldn’t that be amazing?”

A year after Cooper started Ebbu in 2013, he approached Brian Reid, who was running a lab at the University of Colorado’s school of pharmacy, hoping they could collaborate. Reid’s specialty was exactly the “high throughput” screening Russo had called for, in which algorithms are used to quickly determine which potential drugs would interact with which cellular targets. The university’s lawyers, worried about a possible loss of federal funding, nixed the deal, but Reid eventually decided to go to work for Ebbu directly; in 2016, he became its chief science officer.

At INSA, the Jack Herer vape oil may be named after a known strain, but it is not made by extracting or distilling a Jack Herer plant. Rather, it’s formulated in INSA’s lab to emulate the chemical profile of that variety. The company can obtain its THC and other cannabinoids from any cannabis plant, and it buys its terpenes from outside suppliers. Peter Gallagher says INSA does not hide the fact that its vape oils are manufactured products that, like pharmaceutical drugs, are created by isolating and combining compounds. Indeed, he envisions an exciting future when “you could come into the store and build your own blend of certain proportions of cannabinoids and terpenes.”

Recent research has shown that it’s possible to grow cannabinoids from yeast, cutting out the need for any horticulture at all — a prospect that has already attracted industry attention. After all, greenhouses take up more space than laboratories, molecules are easier to patent than plants and once you figure out how to do it all in a petri dish, you don’t have to worry about weather or insects. Ethan Russo, however, thinks producers should be cautious in taking this approach. “The idea that you’re going to bottle this up and eliminate cannabis” is a bad one, he told me. He doesn’t doubt that a few of the more than 500 chemicals in the plant can be identified as critical to its effects, but, he says, “that doesn’t tell the whole story” any more than the flute and violin lines alone can convey the entire impact of a symphony. What’s missing is the way the entourage works together not only to create the effects of the plant but also to provide a counterpoint to its potential dangers. “It’s vastly preferable to take the effort, time and money to develop a specific chemovar of cannabis that’s going to do the same thing and do it better and demonstrably more safely,” he says.

At least one researcher is making that effort, with the help of some willing human volunteers. For the past three years, a neuroscientist named Adie Rae has designed the survey used to judge the winners of the Cultivation Classic, an annual competition sponsored by an alt-weekly in Portland, Ore. Cannabis competitions are common, but the Cultivation Classic may be the only one that requires its judges to spend an afternoon listening to a scientist talk about predictive algorithms and blinded studies.

Last year, I joined Rae as she addressed a crowd of 160 people in a conference room in downtown Portland. The participants had been handed black zipper bags that contained a dozen tiny glass jars, each labeled with a number and housing a single bud of locally sourced, organically grown weed. Their mission, Rae explained, was to take a 48-hour “tolerance break” and then, over the course of the next month, sample each flower, paying careful attention to their psychological state before, during and afterward. A four-digit PIN enclosed in their kits would give them access to a website on which they were to rate the extent to which the sample gave them the experience they wanted, whether it made them sleepy or stimulated, sociable or introspective, cognitively impaired or creative, if it gave them side effects like redeye or anxiety, and if its aroma and appearance and taste were to their liking.

Rae makes information on the chemistry of the winning plants and the effects that users reported available on the Cultivation Classic website. “We wouldn’t take these data and hand them over to Monsanto or some other corporate juggernaut,” she says. “We want the folks who have social-justice components in their workplaces, who are mindful of the resources they use.”

Her most recent findings might disappoint any cannabis company, large or small. After she crunched the Cultivation Classic numbers, Rae could not find strong correlations between any single terpene and the high that resulted. “If we just look at the individual terpenes and try to correlate them with any of our measures about the experience, we have a total scatterplot,” Rae told me. “It’s like a shotgun. The points are everywhere.” She could reach only one conclusion: “There is just no association with any singular terpene for any question we have.”

Rae was neither surprised nor disheartened. After all, she explained, the entourage effect relies on the interactions among hundreds of chemicals, and the attempt to parse it is still in its infancy. “This is a fishing expedition,” Rae says. “Are there any meaningful conclusions to be drawn at all? Is it all about what a person expects from their experience? Is it all about their own endogenous cannabinoid system? Is there any pattern whatsoever besides that THC is intoxicating? We don’t really know.”