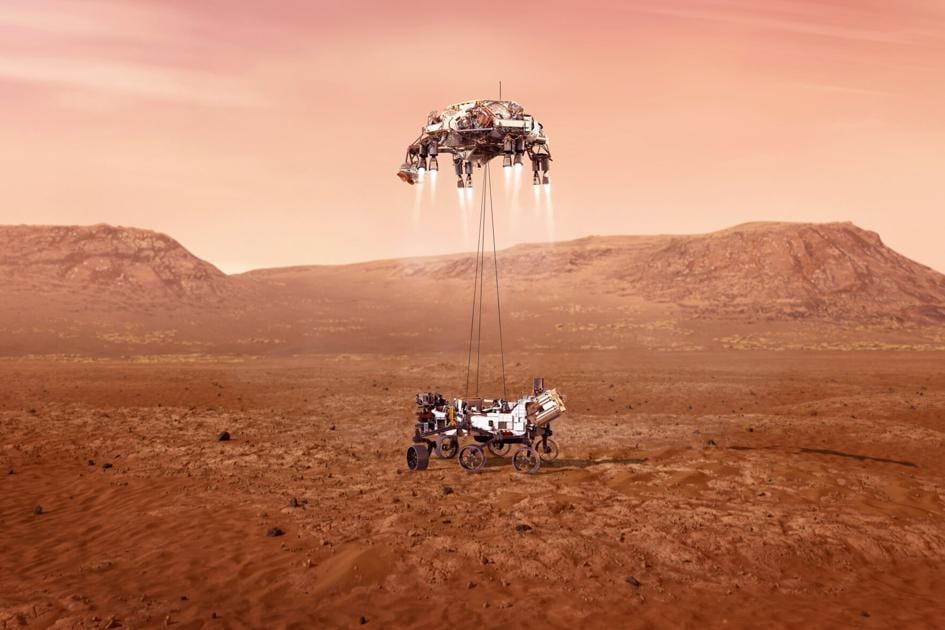 Thursday’s going to be a nerve-wracking day for David Scholz, the principal engineer and head of the team that built the aeroshell. Perseverance is scheduled to touch down about 1:55 p.m. MST Thursday.

“The day of landing is very anxious,” Scholz said in a telephone interview. “It’s an intense day, because there’s a lot that has to happen correctly for it to make it to the ground successfully. Once we see that heat shield ejected, we’re basically done.”

The Lockheed team that built the aeroshell in Colorado was about 18 engineers large and it began work with pre-ordering materials as far back as 2015. Lockheed’s Waterton campus, in the hills of Waterton Canyon near southwest metro Denver, is home base for about 8,000 of the company’s 11,000 Colorado employees.

The Mars 2020 aeroshell, which will carry NASA’s Perseverance rover, was built in Colorado by Lockheed Martin.

Think of the aeroshell as a ball that houses the rover, which is going to explore the Red Planet’s surface and collect samples for a future mission . The aeroshell has to withstand speeds of 12,500 mph and temperatures as high as 2,370 degrees. So the bottom is made of a heat shield, and the top is the “back shell” that holds on to the rover until it can be lowered to the surface with cables. The rover will then cut the cables, and the shell flies away — burning any remaining fuel and crashing on the surface somewhere.

Scholz’s team designed, built, tested and then delivered the aeroshell to NASA in December 2019. It was launched July 30 last year. Lockheed has built all 10 of NASA’s Mars aeroshells in Colorado.

If successful, it will be NASA’s fifth rover and ninth landing on Mars.

Scholz talked about the particular challenges for Perseverance’s aeroshell, one of the biggest planetary ones built at almost 15-feet wide. It’s also delivering the heaviest payload, and landing in one of the most challenging spots attempted.

The team is excited about some new technology on this aeroshell, dubbed the MEDLI2 (short for Mars entry descent landing instrumentation).

“It’s so we can better understand the thermal heat and pressure environment the heat shield is exposed to in entry,” Scholz said, about the instrumentation which is located on the back shell.

“These plugs, pressure readers and new sensors for heat fluctuation will measure the amount of energy the shell is exposed to — we’re going to get a lot more data about the entry environment for the first time.”

This mission is also scheduled to launch a drone-type helicopter, which is attached to the rover. Lockheed engineers also built the deployment system for the helicopter, called Ingenuity.

“It’s primarily an engineering demonstration,” he said. “This will be the first powered flight on another planet.”

“The main objective is exploration. We’re continuing to explore this planet to look for signs of ancient life or environments that are habitable,” Scholz said. “The rover is going to be landing in a crater called Jezero, which is in the delta of an ancient river inside a basin created by an impact with another body some 4 billion years ago.”

According to NASA, Perseverance “will search for signs of ancient microbial life, collect carefully selected rock and regolith (broken rock and dust) samples for future return to Earth, characterize Mars’ geology and climate and pave the way for human exploration beyond the Moon.”

“It’s a great feeling when you see it work successfully,” said Scholz. “It really is the same thrill every time you see it, just like the first time.”