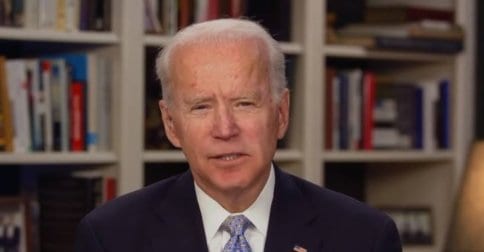 The 2020 Democratic presidential candidate pushed “absentee balloting” in an MSNBC interview on Tuesday, predicting that the coronavirus pandemic effect on the general election is that it “may be virtual.”

Biden told MSNBC’s “11th Hour,” host Brian Williams on Tuesday that there is “no rationale for eliminating or delaying” the general election in November and addressed whether he thought the Democratic National Convention would go on as planned in July.

“It’s hard to envision that,” Biden responded to a scenario presented by Williams of party members from all 50 states crammed into a hot arena in just 104 days, as the nation deals with the COVID-19 pandemic.

“We should listen to the scientists,” Biden noted, referring to the decision to hold the Democratic National Convention as planned in Milwaukee, Wisconsin in the summer.

“We ought to be able to do what we were able to do in the middle of the Civil War all the way through to World War II — have Democratic and Republican conventions and primaries and elections and still have public safety,” he told Williams. “We’re able to do both.”

Many states have postponed their remaining nomination contests in the wake of the health emergency, with the White House extending social distancing guidelines to the end of April. Alaska, Hawaii, and Wyoming were slated to have their election contests on April 4 but have now extended deadlines and are opting for nearly 100 percent vote-by-mail ballots.

Georgia and Ohio, which delayed their primaries until June, are now sending voters absentee ballots while Colorado, Oregon and Washington have only the option to vote by mail.

House Speaker Nancy Pelosi tried and failed to get $4 billion in funding for election assistance, pushing elections proposals that were largely opposed by Republicans, such as same-day voter registration, expanded early voting and providing absentee ballots to all registered voters.

“The things they had in there were crazy. They had things, levels of voting that if you ever agreed to, you would never have a Republican elected in this country again,” Trump said on “Fox & Friends” this week. “They had things in there about election days and what you do and all sorts of drawbacks. They had things that were just totally crazy.”

“This is about making sure that we’re able to conduct our democracy while we’re dealing with a pandemic. We can do both,” he said.

“It may mean a difference in the way we do it. It may mean that social distancing doesn’t get it done. It may mean that you have a circumstance where you have drive-in voting literally, you pull up and you vote. There’s a lot of ways to do it, but we should be talking about it now,” Biden added.