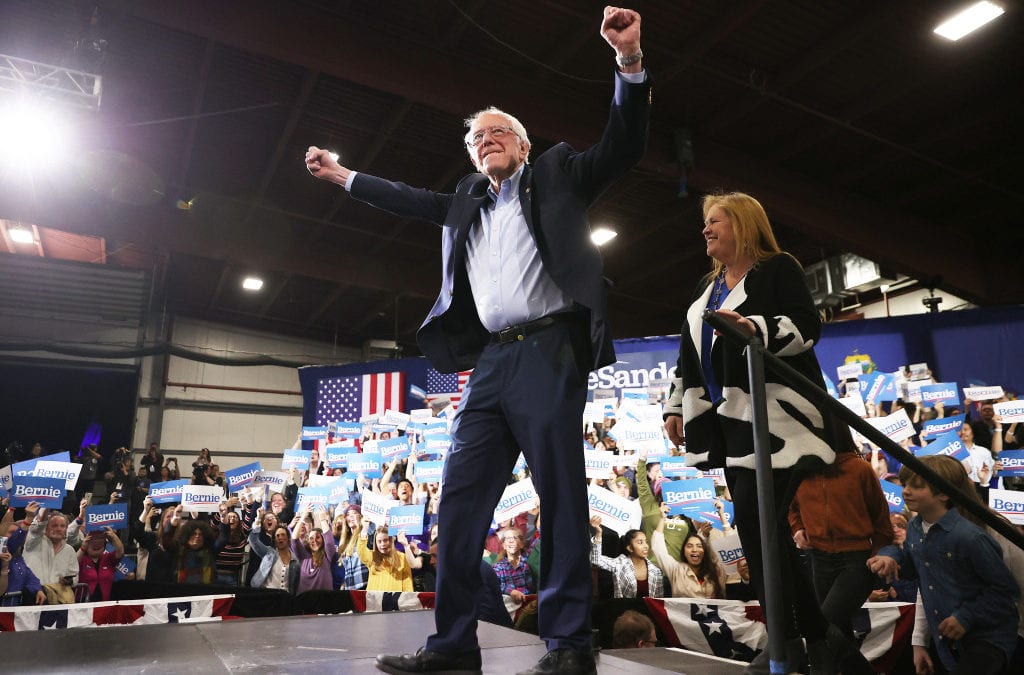 Colorado delivered again for Bernie Sanders on Tuesday, giving him a repeat win in a presidential primary that drew far wider participation than the caucuses he dominated four years ago.

The liberal U.S. senator from Vermont appeared poised to win by double digits as vote-counting continued late Tuesday evening. The real battle was for second place — between self-funding billionaire Mike Bloomberg and Joe Biden, the former vice president who has surged in recent days as he has collected endorsements from moderate former rivals.

Coloradans joined millions of voters across 14 other states and territories on Super Tuesday, the largest day of primaries that will help decide the Democratic nominee to take on President Donald Trump in the Nov. 3 general election. About a third of delegates to the party’s convention were at stake, including 67 Colorado delegates that will be divvied up by the state party in coming days based on the results.

Inside Sanders’ state campaign office on East Colfax Avenue in Denver, many of the 200 or so supporters and volunteers broke into cheers.

Bernie Sanders supporters, volunteers and staff cheer for Sanders after it was announced that he won the Colorado primary on Super Tuesday at Bernie Sanders’ Colorado headquarters on March 03, 2020.

Sanders had entered Tuesday as the polling leader. But Biden was gaining momentum here following his big win in South Carolina on Saturday and the exits from the race of former South Bend Mayor Pete Buttigieg and U.S. Sen. Amy Klobuchar of Minnesota in the last two days. Both endorsed him Monday.

Across Denver on West 38th Avenue, a comparatively low-key gathering for the Biden campaign drew a few dozen supporters to The Bar at Plaza38. Denver Mayor Michael Hancock, who endorsed Biden on Monday, told attendees he was proud of Biden’s performance, despite his lagging result in Colorado.

“The story tonight is the national story,” Hancock said, pointing to Biden’s wins in several other states. “In 72 hours we’ve seen such unprecedented shifts.”

The race narrowed from eight major candidates to five just since Saturday, when billionaire activist Tom Steyer ended his campaign.

Nationally, the race largely has become a battle for the soul of the party between the party’s left flank — represented by Sanders and Warren — and moderates whose standard-bearers are now Biden and Bloomberg, a former mayor of New York City.

Though Warren has struggled in the race, Colorado delivered one of her strongest performances. Her steady total suggests she will earn some delegates from the state.

Shifts in support as results come in

Hundreds of thousands of ballots that came in Tuesday remain to be counted. Large numbers of Colorado Democrats and unaffiliated voters appeared to hold onto their ballots longer than usual as they watched changes in the race.

Some counties, including Denver, anticipated ballot-counting to carry over at least into Wednesday.

On the Republican side, Trump faced five lesser-known challengers who qualified for the state’s primary ballot. With 609,088 GOP ballots counted, he was winning nearly 93% of the vote at 9:30 p.m., followed by former Massachusetts Gov. Bill Weld, at 3%.

A voter wears a pair of Bernie Sanders socks while registering to vote at the Blair-Caldwell African American Research Library in Denver on Super Tuesday, March 3, 2020.

Sanders won the Colorado caucuses in 2016, beating Hillary Clinton by nearly 19 percentage points. Participation then was limited to registered Democrats, however, and about 124,000 Coloradans participated.

This time, Sanders won the reinstated primary with just two paid staffers in the state. Key were his network of an estimated 15,000 volunteers — which the campaign put to work making phone calls and knocking on doors — and enthusiasm for him here that never died down.

Colorado Democrats get their say

Voters interviewed Tuesday as they dropped off ballots or visited voting centers said they weighed the candidates’ differences as well as their perceived chances against Trump.

“I’m not that politically aware, but this year I want to see some change,” said Allie Filmanowicz, 26, a Sanders supporter in Denver who took advantage of the fact that Coloradans can register and vote on the same day. “I don’t like what’s happening now. … Things like climate change are really important to me. I’m a little bit older now, and I’m realizing that things aren’t going to change unless everyone participates.”

Ben Rippe, 37, a Denver Democrat, said he struggled to decide on his vote as he looked ahead to November.

“I’ve been kicking back and forth between Bernie and Biden for the past week, but in the last two days I decided to go with Biden,” he said. “When it’s going to come down to it, he’s going to be the one that more independents and Republicans can switch to” from Trump. “We’ve got to come back to some normalcy in this country.”

J.B. Johnson heads to a voting booth at the Denver Election Headquarters in Denver during Colorado’s Super Tuesday Primary on March 3, 2020.

“I love Pete and I think they may be a good combo, so I had no problem with Joe because he’s ‘Grandpa Joe,’” the Denver Democrat said. “But I think Pete demonstrated that being a good person diffuses a lot of the anger and darkness. I support a lot of Bernie’s agendas, but I don’t think he’s the right guy at this moment. He’s another angry, old white guy and I don’t think we need more anger right now.”

Dhalia Gomez, 23, said Sanders’ focus on expanding access to health care under a universal government-run program drew her in, even if she is uncertain about Sanders’ chances if he wins the nomination: “I think it’s a toss-up between him and Trump, because there’s so much support on either side. It would be nice to have someone that’s for the people (and) that doesn’t propagate hatred.”

Ted Lassen, 65, a retired teacher in Denver, was drawn to Bloomberg, seeing his more moderate stances as better positioned to win in the fall.

“The last thing we need is another ideologue, which is why I don’t like Sanders,” Lassen said. “(Bloomberg) was mayor of New York City for 12 years, and I heard stuff (about him) here and there — so as soon as I heard he’s running, I said, ‘That’s my man.’”

Colorado has another dozen “automatic” delegates, including Democratic National Committee members and elected officials, who are not bound by election results. But they no longer are able to participate in the first ballot at the convention if the nomination is still contested.