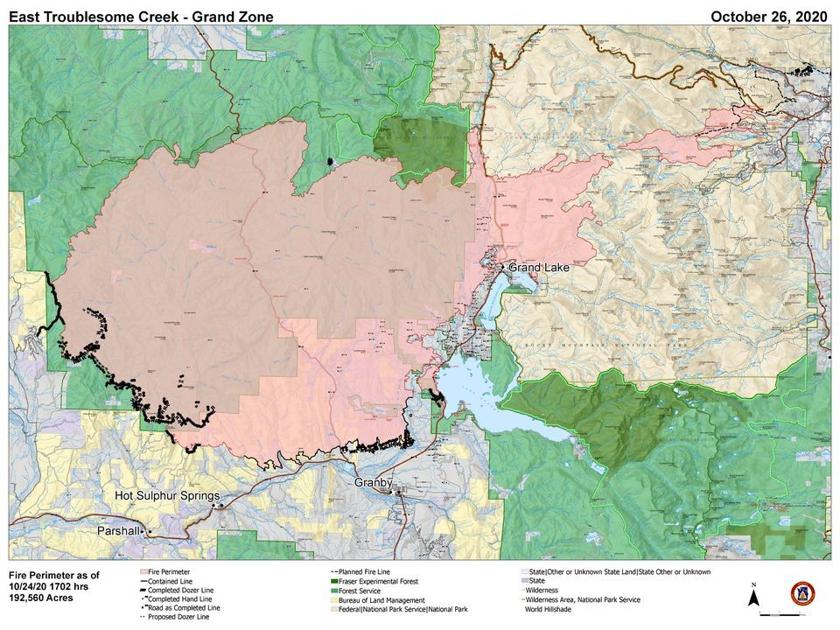 According to a Monday morning report, the total size of the East Troublesome Fire has reached 196,906 acres, including 192,560 acres in the “Grand Zone” and 4,346 acres in the “Thompson Zone.” This is approximately 26,000 additional acres compared to what was reported Friday night. While the blaze did still experience significant growth over the weekend, growth has rapidly slowed to a halt thanks to a cold front and snow that moved into the state.

In a Monday morning update, the Incident Commander Noel Livingston reported that firefighting teams welcomed snow over the weekend. As hoped, the snowstorm started to materialize at around 11 AM on Sunday. Lower elevations of the blaze got around six inches, while higher elevation areas got up to a foot.

As the result of the snow, many firefighters were pulled off of the frontlines as roads in the area worsened. Currently 473 personnel are working the blaze on the Grand Zone side. The Thompson Zone side continues to be managed by the Cameron Peak Fire team, which includes 1,864 personnel.

On Sunday, fire activity was “nothing to speak over.” After the snow hit, the blaze calmed down significantly. The heavy snow is expected to halt fire growth for several days, but is not expected to put the fire out. Warmer and drier weather is set to return.

The primary focus has now shifted to getting those that have been evacuated back into their homes. While good containment exists on the western edge of the fire near Hot Sulphur Springs, firefighters hope to use upcoming days to develop containment in other key areas, such as the southern flank above Granby. Assessment work on potentially damaged homes is underway.

Nearby, the Cameron Peak Fire is 208,663 acres with 64 percent containment.