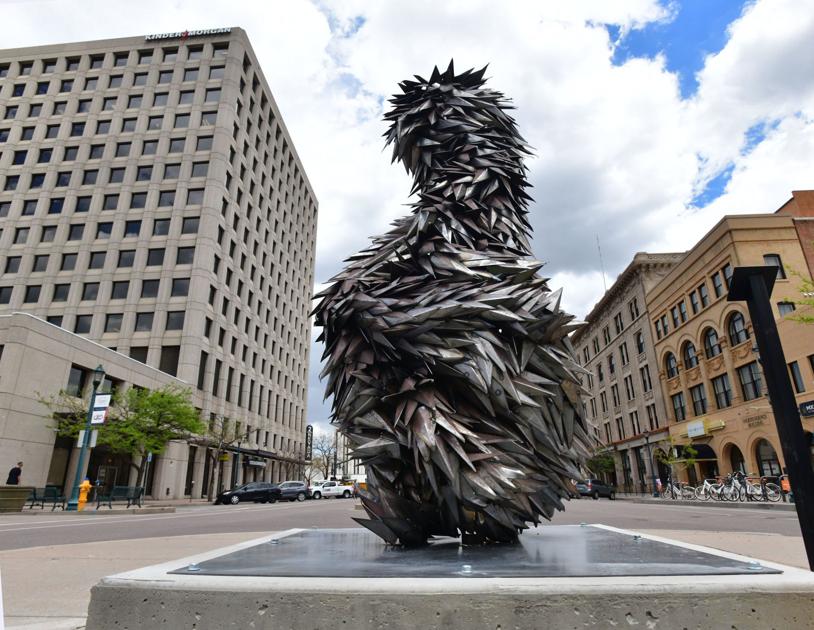 What is art if not potentially controversial?

Denver-based artist Nikki Pike knows her sculpture “WE” could create a brush fire of conversation this summer. It’s part of this year’s new crop of Art on the Streets, an annual, blocks-long, downtown sculpture garden by Downtown Ventures.

The title is a riff on the “We the people” in the preamble of the Constitution.

“It’s not really all of us,” says Pike, a Lewis-Palmer High School graduate who’s an instructor at the University of Colorado at Colorado Springs. “Our democracy is more privileged folks and the less privileged are excluded from that ‘We the people,’ which is supposed to represent every citizen, whether you’re a president or in prison.”

“WE” is part sculpture — a 600-pound metal plinth — and part performance art. The plinth will be installed midsummer in Alamo Park outside the Colorado Springs Pioneers Museum. It’s meant to mimic the platforms often used for memorials or monuments devoted to historical figures, such as military generals. The unadorned block will remain there, giving passersby a chance to whet their curiosity.

During August’s First Friday event, the plinth will come alive with Pike’s hired performers, who will each present two to 10 minutes of material of their own choosing. Afterward, the large-scale text sculpture “WE” will be placed on the plinth, completing the piece.

Pike’s selection of performers “are otherwise voiceless, who we don’t give a stage to,” she says. One of them will be 14-year-old Sage Deal, daughter of Gregg Deal, a nationally known artist, activist and member of the Pyramid Lake Paiute tribe. She’ll read the names of indigenous women and children who have been lost, kidnapped or murdered.

“The public will be exposed to a new way of thinking,” says Pike. “Each performance is a minority in some form and many in many forms. They’re also people who have less access to money. People who have very little. If you’re not a white male, then you’re in the category.”

Public art is especially welcome nowadays, when most galleries and museums are closed due to the pandemic. Not only is it ripe for juicy discussion by observers, but it’s outside, you don’t have to touch it and you can distance yourself accordingly to get a gander.

The bulk of this year’s exhibit will be installed by the first week of June, though installation dates for some of the pieces are up in the air. One artist must fly in from outside the country to get their sculpture settled, and another piece is stored in an academic facility under mandatory closure due to COVID-19.

Other than that, though, it’s the time of the year to wander through downtown, trying to spy the new pieces. This year’s outdoor sculpture garden will feature 13 new works: six murals and seven loosely-defined sculptures, including one piece that will use the same suspended grid used by “Poly Poly,” a previous AOTS piece.

“Everybody needs a chance to get out of the house in a way that feels safe to them,” says Claire Swinford, director of urban engagement for Downtown Partnership of Colorado Springs. “Public art is accessible in its current format. We’re excited to get the pieces up and get a sense of hope and life back to downtown.”

This year’s exhibit saw the highest number of submissions in the history of the program, and half of the accepted entries are by Colorado artists. All were awarded a $2,000 stipend and all works are available for purchase. Submissions were judged by Joy Armstrong, development director at Inside Out Youth Services ; Virgil Ortiz, mixed media artist and Cochiti Pueblo ceramicist; and Michael Tavel, an architect and urban designer.

Swinford noticed entries trended toward themes of neurodiversity, access and inclusion, ideal for exploration in public art due to its inclusivity and accessibility.

“We’re seeing more innovation in the artists’ approaches to traditional forms,” she says. “In the public art realm, taking a piece and bolting it to the concrete isn’t enough. People want it to mean something. They want to ask what does this mean, why is this here?”