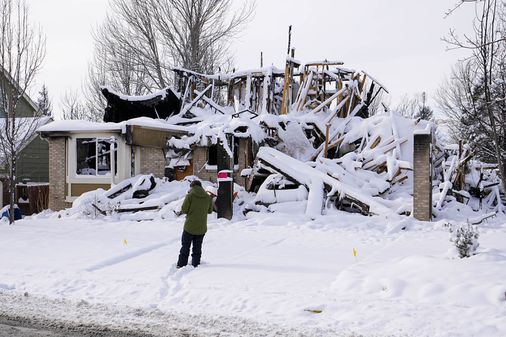 In a discouraging reversal, law enforcement officials also raised the possibility Saturday that there could be casualties from the fire. A day after officials said there had been no immediate reports of deaths, officials from the Boulder County sheriff’s office said they believed that two people were still missing.

“Snow will complicate what we can do today, but we’re doing everything we can to find those missing folks,” said Jennifer Churchill, a spokesperson for Boulder County.

Churchill declined to identify the missing or say where they had last been seen. But family members identified one of them as Nadine Turnbull, 91, telling 9News that a relative had tried to rescue Turnbull from her home in Superior only to be turned back by flames engulfing the front and back doors.

Nearly 13,000 households around Boulder were without natural gas Saturday, and 7,500 households still had no power, according to Xcel Energy, the local utility provider. The company said electricity would be restored later Saturday but that natural gas would take several days.

The Town of Superior said it was shutting off water in the fire zone Saturday to prevent additional damage.

“This is disappointment on disappointment,” said Alli Bowdey, a nurse whose family was packed into a house with relatives after fleeing their Louisville home. On top of everything else, her husband tested positive for the coronavirus and was quarantining in a hotel Saturday.

“We just looked at each other in disbelief,” she said.

Robert Guokas, 83, was well-prepared for a power outage at his home in the Sans Souci mobile home park, which did not burn in the fires.

A former Boy Scout, he has been keeping his mobile home warm with a propane heater, using a camping stove to heat water and bundling inside sleeping bags and layers of clothing collected over the years from Army surplus stores. But by Saturday, he was starting to run low on propane and he worried that if the outage continued for much longer, his preparations would not be sufficient.

“That’s going to stretch my limit,” he said. He said that leaving for an emergency shelter would be even worse than staying home. By staying put, he could try to minimize the damage, for instance by replacing the pots he has set up to catch the water dripping through his roof after the harsh winds on Thursday tore part of it off.

“You leave it for three or four days or a week, and it becomes a derelict; it becomes unfixable,” Guokas said.

If the outage continues, he said, he worries most about his pipes bursting. The damage caused by a burst pipe could be so severe that it would be cheaper to find a new mobile home than to make repairs on his decades-old unit. But with his income of just $1,400 a month from Social Security, he has no idea how he would afford either.

As the scale of the destruction came into clearer view Saturday, thousands of displaced families across the Boulder area began to confront questions about whether they would rebuild and how they would find temporary housing in a place confronting a stark shortage of homes and an affordability crisis that has already priced many young families out of Louisville and Superior.

Even as Bowdey’s husband, a property manager, fights off COVID-19 at a hotel, he has been inundated with 200 requests for housing from families who have no place to go, she said. “It kind of hits you every so often that this is not just weeks and months — this is years.”

Clint Folsom, mayor of Superior, said finding long-term housing for so many families was the next emergency. While his home survived the fire, his 76-year-old mother’s home burned to the ground, as did two homes owned by his sister-in-law.