A Colorado Man Reportedly Planned to Join an Anti-Lockdown Protest. Then the Feds Found Pipe Bombs in His Home. 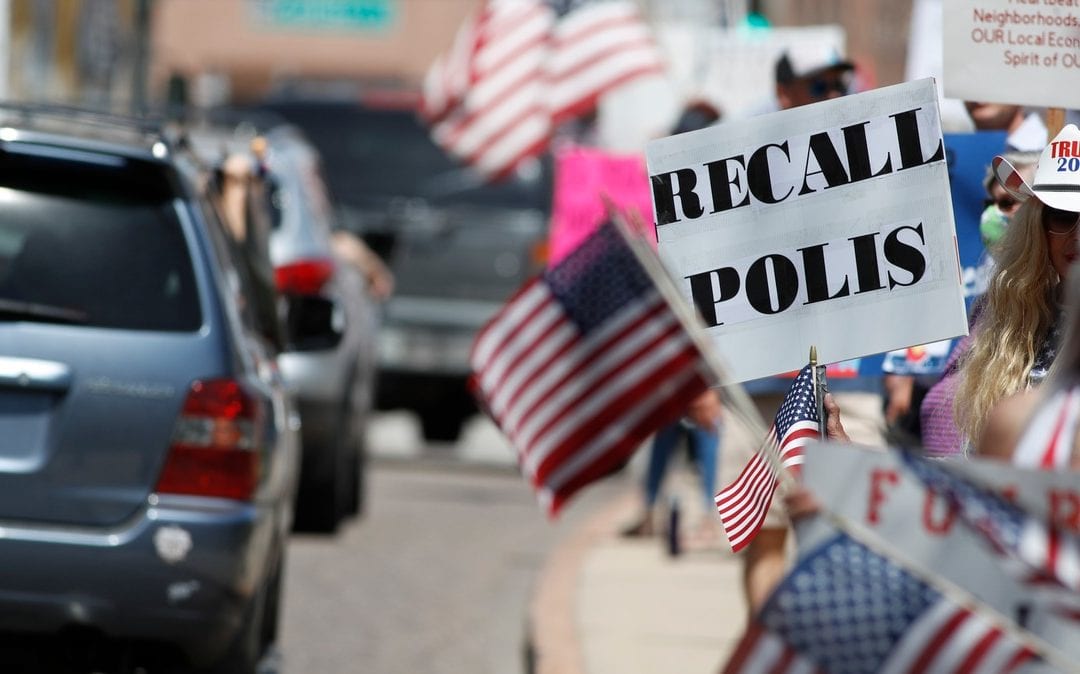 A Colorado man was arrested Friday when federal agents found pipe bombs at his home, hours before the anti-lockdown rally that he reportedly planned to attend at the state Capitol.

Bradley Bunn, 53, allegedly told agents that he planned to use the bombs against law enforcement if they attempted a forced entry, according to an arrest affidavit.

Federal agents with the FBI and ATF reportedly became aware of Bunn after a series of aggressive social media posts, according to an anonymous official who spoke to ABC News after being briefed on the case.

The Denver Post also reported that Bunn, who’s allegedly a member of an anti-government militia, boasted online that he’d bring high-powered weapons to the state’s Capitol for the protest. An organizer of that event said open-carry protesters weren’t welcome at the rally in the first place, however, and it’s unclear what sort of weapons Bunn intended to bring.

Federal law enforcement subsequently learned Bunn was in possession of four pipe bombs, plus materials that could’ve been used to make more. He was charged with the possession of destructive devices, a charge that carries a maximum 10-year sentence and a $250,000 fine, according to a news release.

Meanwhile, an organizer for Friday’s rally, Joe Oltmann, said via Facebook messenger that Bunn was not associated with his event, which was intended to be “non-politically affiliated.”

“Our statement was simple, this has to be about the people and their ability to assess their own risk and feed and protect their families,” Oltmann said in a message about his anti-lockdown to VICE News.

An arrest affidavit filed in federal court in Colorado Sunday doesn’t mention Bunn’s potential involvement in the lockdown protests either. Rather, agents said that Bunn was planning to use his four pipe bombs against law enforcement as a defensive measure. It’s unclear why he felt he would be targeted by law enforcement.

“If I experienced a hard entry, at 3 a.m., having been an infantry commander, it’s really tough to get guys spread out no matter how hard you try. They still want to clump up ’cause of fear, and I know their, their, anyway, blah, blah, blah,” Bunn told investigators, adding that he didn’t have much experience making pipe bombs, according to the affidavit.

“So a hard entry in the morning, you were going to use them on a bunch of clumped-up guys out front?” an agent asked.

It’s also unclear where Bunn made the alleged social media posts about the protest that reportedly spurred law enforcement’s concerns.

Similar demonstrations have unfolded across the country in recent days, almost always at the doorsteps of state legislators who’ve imposed rules mandating that people stay at home or not return to work until the coronavirus pandemic abates. They’ve drawn a mix of people who say they’re small business owners just trying to ward off further economic devastation or government overreach, plus groups of heavily armed protesters sometimes looking to promote an agenda or unrelated conspiracy theories.

The organizer of the other event said it was too late to postpone, and that the media would “spind it negativly either way, that’s their jobs.” The open-carry group wound up not arriving at Friday’s protest, but Oltmann said “by that time they had already instilled fear in the group that simply wanted their grievances and intentions heard.”

It’s also unclear whether Bunn was affiliated with that open-carry group.

Regardless of the reason for the protests, Deborah Birx, the coordinator for the White House’s coronavirus response, said on Fox News Sunday that the demonstrations are “devastatingly worrisome.”

Bunn will be advised of his rights and charges Monday via video conference, according to the U.S. Attorney’s Office for the District of Colorado. He hasn’t entered a plea, and it wasn’t immediately clear who would represent him in court.

Cover: A placard asking for the recall of Colorado Governor Jared Polis is waved by protesters during a rally along Lincoln Street to demand that all businesses closed in the effort ot stop the spread of the new coronovirus are reopened Friday, May 1, 2020, in front of the State Capitol in Denver. (AP Photo/David Zalubowski)