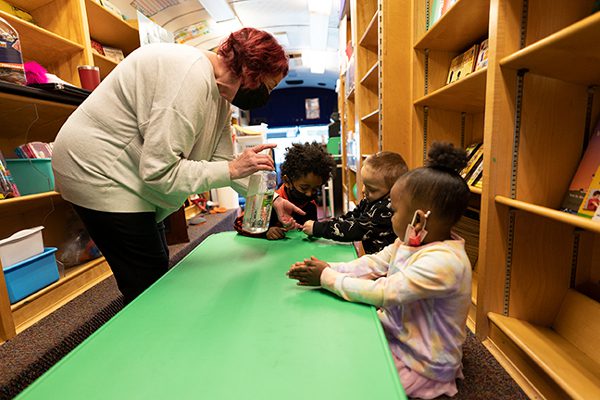 DENVER | For Colorado parents with 2-year-olds who are deep in the “no” phase, on strike against naps, or otherwise living their best limit-testing lives, here’s some good news.

When they’re 4, they’ll get to go to preschool for free.

That’s because Colorado is set to provide universal preschool at no cost to families starting in the fall of 2023 using proceeds from a voter-approved nicotine tax. The program will provide at least 10 hours of preschool a week, with some children getting additional hours and services based on their needs.

There’s still a year and a half until the program’s launch, but early childhood leaders last week unveiled six draft recommendations to guide what will be an unprecedented expansion of publicly funded preschool in the state. Themes include giving families a variety of preschool choices, making it easy to apply, and using local agencies or groups to administer the program.

Currently, the state-funded Colorado Preschool Program serves about 23,000, or about a quarter, of the state’s 4-year-olds, specifically those who come from low-income families or have other risk factors such as language delays or poor social skills. The program also serves about 7,000 3-year-olds with risk factors.

The state’s Early Childhood Leadership Commission will approve final preschool recommendations next month, then forward them to Gov. Jared Polis and the legislature. Here are three key takeaways for families.

Currently, more than three-quarters of children in the Colorado Preschool Program attend preschool in public school classrooms. That’s likely to change with the debut of universal preschool. Aside from the fact that most school districts won’t have the space to double or triple their preschool numbers, state leaders have emphasized repeatedly that families will be able to send their child to preschool in a variety of settings, including schools, private centers, and licensed home-based locations.

Nicole Riehl, president and CEO of Executives Partnering to Invest in Children, said offering universal preschool in many settings will help working families who may have non-traditional hours or other needs.

It’s “definitely something that we really highly value,” she said.

Corinne DePersis, the mother of two girls, ages 4 and 7, also is hopeful about the possibility for more preschool choices and more clarity about the options, especially for families whose children have disabilities. She still remembers being turned away from a well-regarded private child care center because her older daughter Madeleine, who was nearly 2 at the time and has Pitt-Hopkins syndrome, couldn’t yet walk.

“It’s so embarrassing and heartbreaking,” she said, choking up as she remembered the incident from five years ago.

DePersis served on the special education subgroup that helped inform the universal preschool recommendations. She’s also part of the Early Childhood Braintrust, a group that aims to elevate parents, providers, and diverse communities in conversations about early childhood policy.

“You won’t have to feel as a parent, if I reach out to the school I’m going to be denied,” she said, “because that’s soul-crushing.”

Leaders crafting Colorado’s new preschool program — and the new early childhood department that will lead it — aim to create a simple application process for parents. They envision a user-friendly digital or paper form available in multiple languages that will serve as the application for universal preschool and a host of other programs such as federal Head Start preschool and the state’s child care assistance program.

DePersis, who also participated in a working group focused on the preschool application, said when she applied for preschool for her daughters, she didn’t know what, if any financial assistance, her family was eligible for.

Under the new preschool application process, families will be able to determine their eligibility for a variety of early childhood programs or services without having to comb through the fine print on multiple websites, fill out the same information on lots of different forms, or feel the stigma of asking for help.

Christina Walker, who’s involved with Braintrust and is director of policy and advocacy at Clayton Early Learning in Denver, said she appreciates the vision, but wants to see details fleshed out.

“Making that application actually work is really important,” she said.

While the existing Colorado Preschool Program will be folded into the state’s universal program, leaders of the new effort still want to prioritize young children with the greatest needs, including those who come from low-income families, have delays or disabilities, or are dual-language learners.

In part, they’ll do this by paying preschool providers more for serving such children using a system of weights for different categories. In addition, some children will have access to full-day preschool slots and the funding system will consider factors such as regional cost differences, preschool quality, and provider qualifications among other criteria.

Finally, leaders of Colorado’s universal preschool initiative are well aware that infant and toddler care, which is more expensive to provide than preschool, can be decimated when publicly funded universal programs roll out. That’s why they’re recommending incentives for child care providers who continue to serve the state’s infants and toddlers.

Riehl, of Executives Partnering to Invest in Children, or EPIC, said her group also wants to see more focus on the physical infrastructure needed for universal preschool so that existing infant and toddler space isn’t simply converted to preschool rooms when the universal program launches.