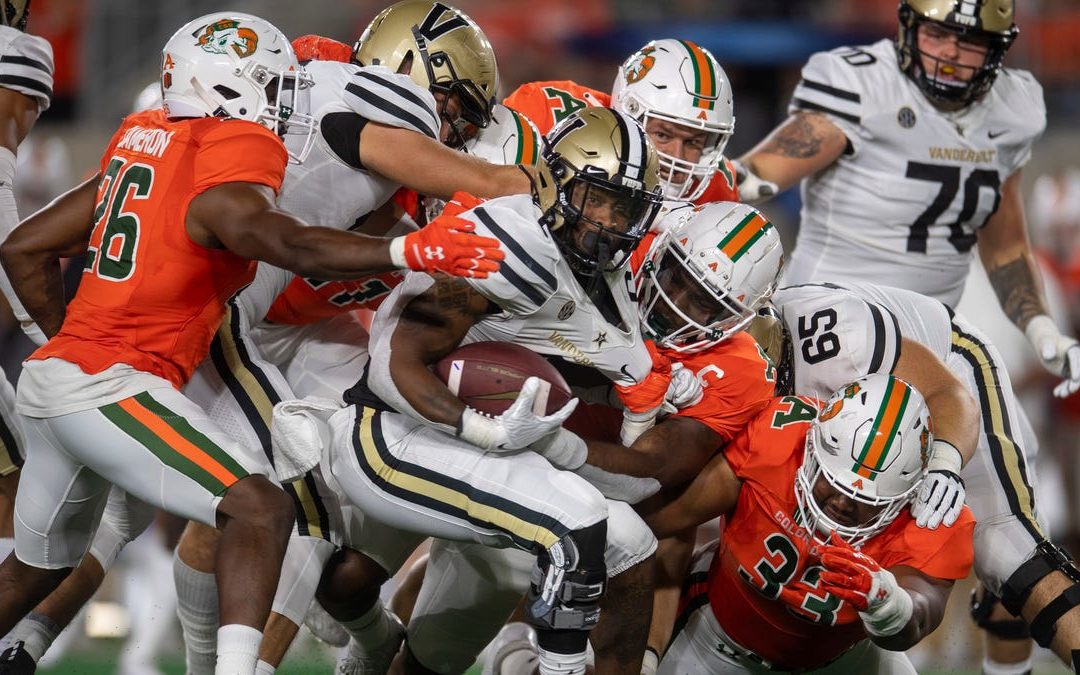 The Rams lost 24-21 to Vanderbilt on a last-minute field goal after blowing a 14-point lead. Vanderbilt’s Joseph Bulovas hit a 39-yard field goal with 19 seconds left to give Vanderbilt the win late Saturday night at Canvas Stadium.

CSU (0-2) looked ready to run away with the game in the first half as the offense totally dominated and Vanderbilt (1-1) looked lost on offense.

It all flipped late in the first half, and CSU lacked much punch on either side of the ball in the second half.

Here are three thoughts on the Rams’ home loss.

CSU raced to a 14-0 lead in the first half with David Bailey scoring on a play-action pass and a 20-yard run. The Rams seemed completely in control.

At one point in the first half, CSU had piled up over 250 yards of total offense and Vanderbilt sat under 80.

Yet the Rams never got the kill. Cayden Camper missed two field goals in the first half (39- and 46-yard attempts) and a lead that should have been at least three scores late in the half was just 14.

Then CSU allowed a punt to be partially blocked and a late hit helped lead to a Vanderbilt touchdown drive just before halftime to make it 14-7 at the break.

CSU had a chance to return a potential interception for a touchdown early in the third quarter, but the chance went off the hands of Thomas Pannunzio. After CSU got the ball moments later, Todd Centeio threw an interception.

Vanderbilt quickly turned that into a touchdown to tie the game at 14.

Later in the third quarter, Vanderbilt scored again to go up 21-14 as CSU’s offense got stuck in the mud.

The Rams earned just two first downs in the first 25 minutes of the second half.

A late drive and touchdown pass from Centeio to Trey McBride tied the game with less than 4 minutes left, but Vanderbilt quickly marched down the field (with the help of two CSU personal foul penalties) to get in scoring range.

CSU got the ball at its own 25 with 19 seconds left and moved to its own 42 and tried a hook-and-ladder play but couldn’t score.

The Rams had 305 yards of offense at halftime and ended with 445.

David Bailey had 10 rushes for 64 yards at halftime but carried the ball just five more times in the second half (and ended with 80 yards). Centeio finished 20-38 for 238 yards, two touchdowns and an interception.

Dante Wright had four catches for 43 yards but let hurt in the second half.

While CSU lost 42-23 to South Dakota State last week, Vanderbilt had an even worse opening game. The Commodores lost 23-3 to a mediocre FCS team in East Tennessee State.

Vanderbilt had lost 11 games in a row and 13 straight against FBS teams. The Commodores had 10 consecutive road losses and didn’t score a touchdown last week.

It was likely CSU’s best chance to win a game for another month and it didn’t happen.

Now? The Rams hit the road next week to face a Toledo team that was less than 2 minutes away from winning at Notre Dame Saturday. Then it’s a road game at College Football Playoff hopeful Iowa.

This could unravel fast.

It was obvious pretty early in this game that it was a matchup of two teams with a lot of issues. There were mistakes all over the field. Execution issues, coaching errors and generally sloppy play all around.

The winner at least gets a victory to build off of, but it’s probably not a harbinger of a season turnaround. There might not be six combined wins between the two this season.

The loser? Well, there were just more signs of trouble.

When the stars of the game are clearly the punters, it’s probably not a great sign. But, hey, Ryan Stonehouse also had an 81-yard punt and that was pretty incredible!

This was a game for only the most hardcore football fans and gambling addicts.