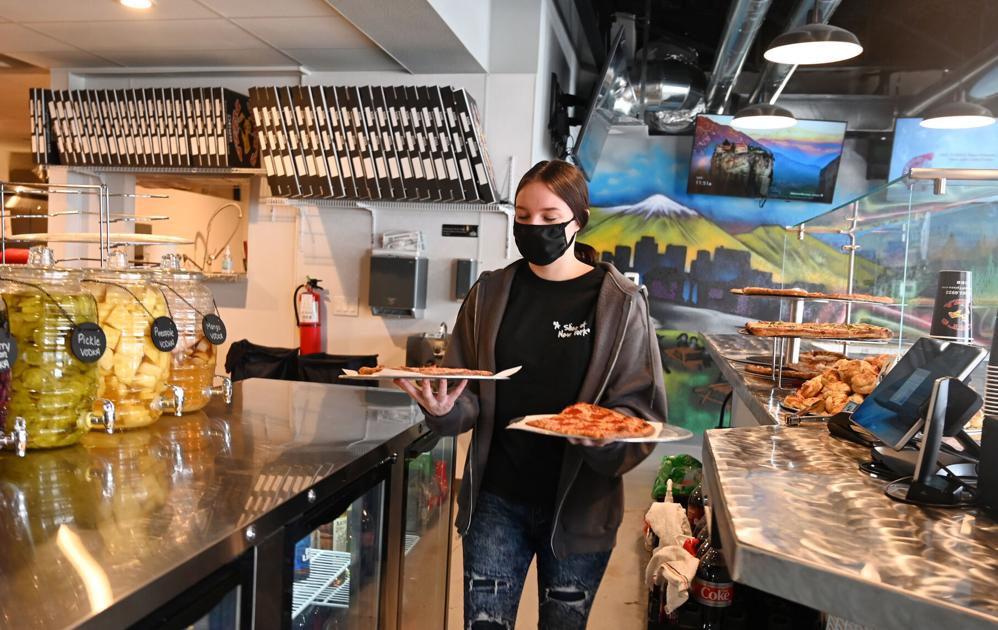 Pizza travels well, even during the COVID-19 pandemic.

Joey’s Pizza and Ruffrano’s Hell’s Kitchen Pizza, two longtime Colorado Springs-area restaurants popular for their New York-style pizza, have added locations as they seek to grow their presence in the Pikes Peak region.

Ruffrano’s Hell’s Kitchen opened a fourth location in December at 7669 N. Union Blvd., in the Rampart Village Center northeast of Union and Briargate boulevards on the city’s north side.

Joey’s Pizza added a third location in February at the TGap Marketplace shopping center, 2123 Templeton Gap Road in central Colorado Springs. Joey’s also has locations at 227 S. 8th Street on the west side and at 1843 Briargate Blvd. in northern Colorado Springs. RICH LADEN, THE GAZETTE

Joey’s and Hell’s Kitchen specialize in hand-tossed, thin-crust pizza that New Yorkers know as having large, wide slices that can be folded when eaten. The restaurants have additional menu items, such as calzones, stromboli, salads and desserts.

For Joey’s, which also operates at 227 S. 8th St. on the west side and 1843 Briargate Blvd. up north, the TGap Marketplace became available when another pizza place decided against leasing space in the shopping center, said co-owner Peter Buckles.

He and his wife, Christina, purchased Joey’s in 2017 from namesake founder Joseph Stasolla.

Another Joey’s Pizza has opened in the Patty Jewett neighborhood. Manager Jen Moreland prepares fresh basil to be used in many of the recipes for the on Tuesday, March 16, 2021. (Photo by Jerilee Bennett, The Gazette)

TGap Marketplace’s owner, which also owns the 8th Street building where Joey’s opened in 2019, asked the Buckles if they wanted to expand to the shopping center, and the couple agreed, Peter Buckles said.

TGap Marketplace is one of the city’s oldest shopping centers. Its mix of businesses includes Sasquatch Cookies, the Urbane Collective clothing store and craft brewery Whistle Pig Brewing, which expects to open in the spring.

“There’s a lot of good tenants in there,” Peter Buckles said. “We get a lot of support from the local residents of that area, which is great. Our business is already doing better than our 8th Street location, which is doing well, too.”

During the pandemic, Buckles said business for Joey’s Pizza has increased 15% to 20% on a year-over-year basis, which gave the restaurant the opportunity to expand.

“People like the idea of nobody really handling their food once it goes into a 650-degree oven,” he said. “It comes right out, it’s sliced and it’s brought right to you. People take comfort in that. So pizza’s actually been doing very well right now.”

The third Joey’s won’t be the last, however. Buckles said he and his wife have targeted a fourth location near Woodmen and Marksheffel roads; a fifth location also is under consideration at a site he declined to identify.

Hell’s Kitchen Pizza owner Nelson Rufran said he expanded to the Briargate area, where he does primarily pick-up and delivery, after his customers requested a location on the fast-growing north side. His short-term lease at the shopping center also offered good terms, he added.

“We’re getting a lot of requests for our pizza up there,” Rufran said of the north side. “It seemed like a good market to tap into. There’s a lot of people up there. And we didn’t have anything up there. We’re trying to cover our bases in Colorado Springs.”

His restaurants’ sales also have increased during the pandemic, yet costs have gone up, too, Rufran said.

He’s had to buy masks for employees and plenty of hand sanitizer, he said. And while his delivery business has jumped, he’s also had to ramp up his purchase of pizza boxes and hire more drivers.

His business also has been hit with more fees for credit card purchases and deliveries by third-party services, Rufran said.

“We’re making the money,” he said, “but the profit margin is not there like it used to be.”